With graphic photos being displayed on cigarette packets, it’s impossible to escape the facts about how smoking plays a detrimental effect on general and oral health. The frightening thing is though, people feel they are escaping these effects by making the switch to e-cigarettes and vaping. In fact, some studies have shown that vaping could actually hinder cessation in some individuals by prolonging or increasing the addiction to nicotine.

We know that cigarettes contain harmful products such as nicotine and tobacco. Nicotine is addictive and its physical effects cause restriction of blood vessels in the mouth, masking the symptoms of gum disease and effecting the immune response to the presence of bacterial biofilm. Tobacco products can have a carcinogenic effect on the soft tissues.

It’s well researched and documented that smoking cigarettes increases the risk of periodontitis and mouth or lung cancer, as well as other things.

E-cigarettes are thought to produce fewer toxic compounds than conventional cigarettes, but they can still contain many harmful substances, including nicotine and heavy metals. Nicotine causes vasoconstriction in the same way as smoking a cigarette does. However, some E-cigarettes and vapes on the market contain the equivalent of up to 40 cigarettes in one product.

Being more widely accepted than smoking physical cigarettes, individuals find themselves smoking these vapes and e-cigarettes more often and for longer, taking in more nicotine than they ever would have done by smoking cigarettes. 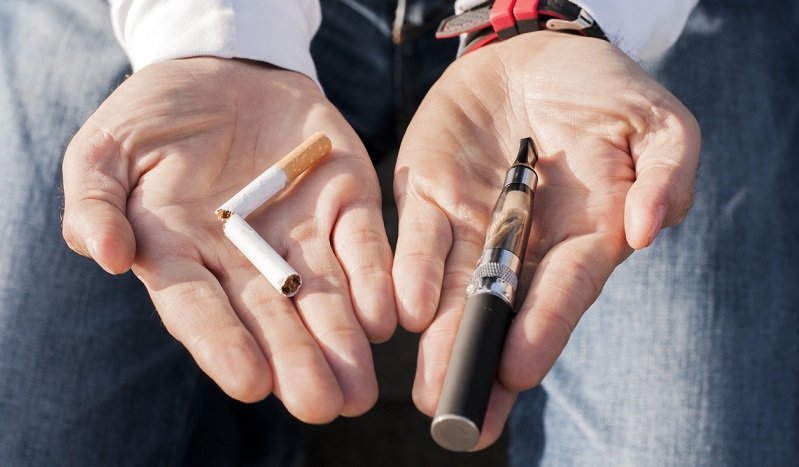 There is still a long way to go when it comes to research about the effects vapes and e-cigarettes have on health and oral health, but there have been some studies that have specifically looked at the oral microbiome of smokers, non-smokers and vapers with interesting results.

A team from New York University examined 84 volunteers over a six-month period: 27 people who smoked cigarettes, 28 who used e-cigarettes, and 29 non-smokers. None of the participants had a hygiene appointment during the study to make the results more consistent.

The team compared the types of bacteria found at the gingival margin at the beginning and at the end of the six-month study. They also compared markers of inflammation and immune activity.

The pattern of the vaping groups oral bacteria shared characteristics with both smokers and non-smokers, with more similarities to smokers. Unique traits seen among the e-cigarette users, was the abundance of the bacteria Fusobacterium and Bacteroides species. Both of these species are linked with gum disease. Several markers of inflammation and the immune response were also seen to be higher in smokers and e-cigarette users than in non-smokers.

In another study, plaque was collected from under the gum line of similar participants, although more groups were used in the study. They were split into: non-smokers, current vapers, current smokers, ex-smokers who currently vape, and dual-users (both smoke and vape).

E-Cigarettes causing issues such as gum disease and cancer

The team of researchers, including Prof Kumar, lead professor of periodontology at the Ohio State University, stated ‘the mouths of electronic cigarette users were teaming with micro-organisms capable of causing issues ranging from gum disease to cancer’. They claimed that the oral bacteria composition of vapers resembled that of people suffering from periodontitis.

Prof Kumar states, “vaping is such a big assault on the oral environment, and the change happens dramatically and over a short period of time. If you stop smoking and start vaping instead, you don’t move back toward a healthy bacterial profile but instead shift up to the vaping profile. Knowing the vaping profile is pathogen-rich, you’re not doing yourself any favours by using vaping to quit smoking”.

It’s easy to see why people consider vaping to be less dangerous to our health than smoking. The vapour being steam instead of tobacco smoke. However, some of the same principles still apply. Including nicotine effects on blood vessels, nasty chemical compounds in the vapour inhaled and addiction, as well as the heat applied to the oral cavity. Heating up the oral cavity frequently dries out the tissues and increases the capability of the bacterial load in the mouth.

There is a serious lack of research around vaping and e-cigarette use. It’s been deemed 95% safer than smoking, but it is still far from safe. They simply haven’t been around long enough for us to know the long-term effects of their use. We know the effects of smoking, but to replace that with vaping may not be as innocent or beneficial as you may first think.

Being health care providers, we should be spread awareness and get people to think more about the choices they make. With increasing reports of vaping seriously affecting oral health and leading to acute forms of gum disease, we have a duty of care for them to know the good, the bad and the ugly.

A great way to make this information available to your patient base without having to have the conversation, is to display it in your waiting room.

Waiting room TV, like Envisage Dental TV, is the perfect way to do it. You could save someone’s teeth, or someone’s life, by showing these topics on your waiting room TV.

Envisage Dental TV is a waiting room marketing solution, enabling you to educate your clients and to showcase your treatments and services. With over 1000 videos, covering all oral health care issues, as well as a huge library of product promotional videos, your practice will be able to keep clients up to date with national campaigns, local healthcare priorities as well as your latest offers and treatments.

Effects of menopause on oral health

Effects of menopause on oral health